What is Earth Source Heat?

Earth Source Heat (ESH) is Cornell’s version of a geothermal system that would use the Earth’s constant, internal heat to warm the Ithaca campus. Well pairs would be drilled into deep sedimentary rock layers or into deeper crystalline “basement rock” where the internal heat of the Earth is much hotter than comfortable air temperatures. Water would be pumped down one well and would flow through various fissures and channels in the rock where it is naturally heated. The resulting hot water would then be drawn up into a second well and pumped to a heat exchange facility on the surface where it exchanges its thermal energy into a secondary loop which distributes hot water to Cornell’s campus buildings and facilities.

Cornell’s faculty and engineers are exploring a hybrid system that would couple base load heating from ESH with peak heating from fossil fuel free energy options. Based on many years of operation, peak heating would be only needed during extreme cold spells that occur about 20 days each year. As a result, base load ESH would provide about 95% of the campus’s annual heating demand with peak energy from a sustainable supply covering the remainder.

Earth Source Heat is Cornell’s version of a geothermal system that would use the Earth’s internal heat to warm the Ithaca campus.

Cornell scientists believe that the project holds potential that leads to a scalable solution that could be deployed across New York state and in other cold-climate regions around the world. It is widely agreed that there is enough natural heat stored within the earth to sustain us indefinitely. Importantly, this stored heat is available at economically accessible depths using current conventional drilling methods. While similar direct-use geothermal heating systems have succeeded in the western U.S. and various parts of Europe, a deep, direct use district heating system has never been deployed in areas with the geological conditions present in upstate New York.

Why is the Cornell University Borehole Observatory necessary?

The borehole observatory is the next step toward Earth Source Heat and will enable researchers to study how much heat can be produced by deep geothermal energy.

While Cornell is driven by the need to reduce its fossil fuel footprint, the university is also keenly interested in understanding the impacts of technology choices. Accordingly, in summer 2022, Cornell drilled a “test” or exploratory borehole that provides a gating mechanism to ensure the safety and soundness of the Earth Source Heat project before moving forward with demonstration and production well pairs. This test borehole, the Cornell University Borehole Observatory (CUBO), is allowing Cornell to precisely understand the geologic conditions beneath Ithaca, to develop ongoing monitoring systems and ensure that the methods used to extract heat from deep within the Earth will be successful technically and not create unacceptable risks or unintended impacts. Cornell is committed to studying and addressing these issues in a thorough and transparent manner, developing best practices that will minimize risk and provide guidance for others who might implement this technology.

CUBO provides direct access to the subsurface, allowing scientists to determine rock properties including rock compositions and fractures, mechanical strength, fluid content and transmission, and pressures and tempera¬tures. Cornell scientists continue to analyze these data and are gathering data from instruments left within the borehole to generate the information needed to make in-formed plans and decisions, including identifying the best target zone and well design for future heat production.

CUBO has provided researchers with information about an existing network of natural fractures in the rock. These data are essential to evaluate the possibilities of establishing connections for water to flow between future production wells. Researchers are using rock samples and in-situ tests of the rock properties around the borehole to inform computer models that will be used to estimate the thermal and hydraulic performance and lifetime of future ESH wells.

If it is determined that the process could safely and effectively advance, the next step is to drill a demonstration well pair on the Ithaca campus. Eventually, the university would hope to begin a phased process to create a full-scale system capable of heating the entire Ithaca campus. 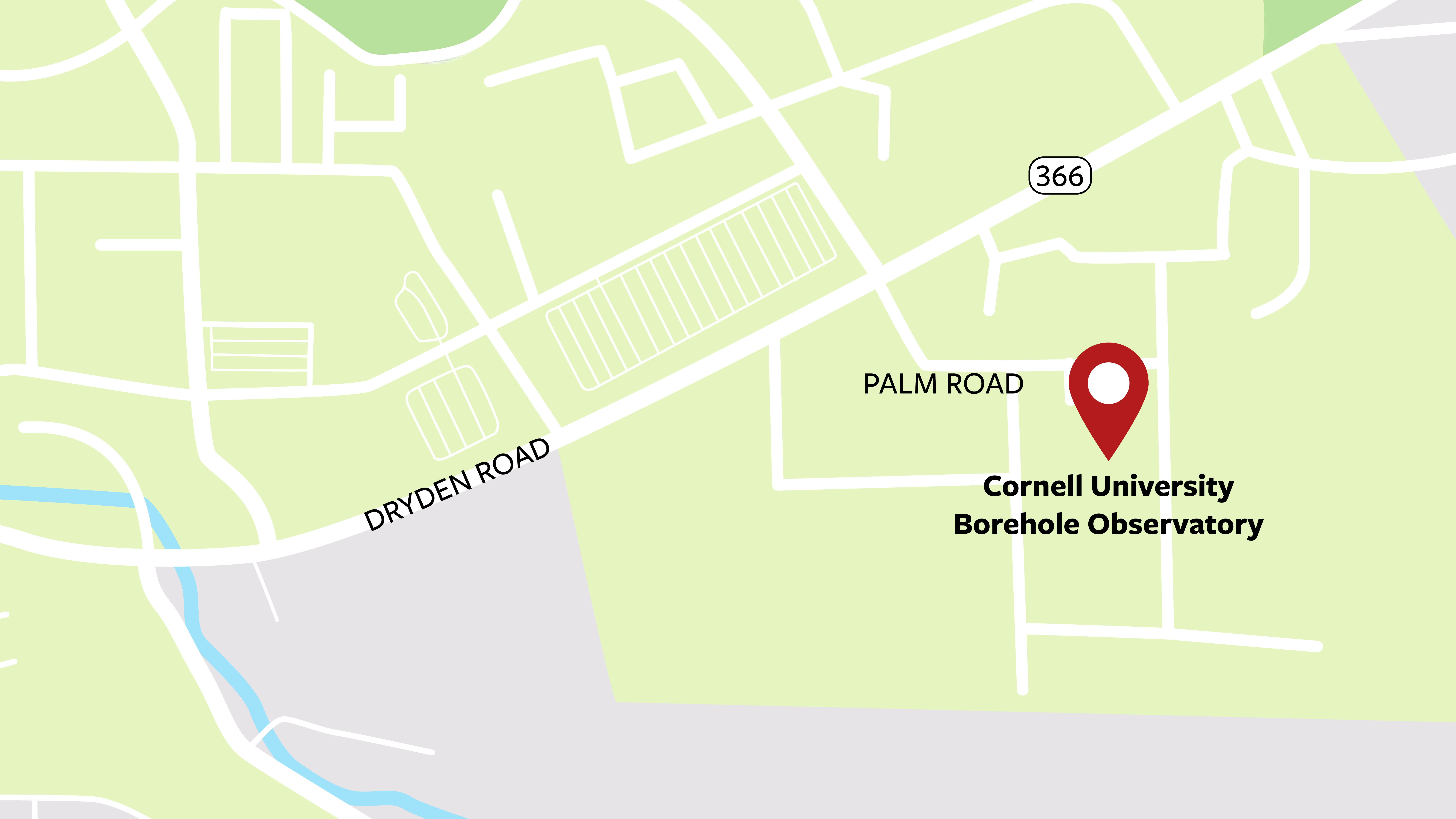 CUBO is located on Cornell-owned property near Palm Road in the Town of Ithaca. Drilling at the site did not disrupt plants, trees or sensitive ecosystems as the site was already an open gravel pad (a former parking lot). Additionally, electricity and water services were already available at this site, which also eliminated the need for new disruptive construction to connect those resources. The area has been cleared and fenced in and a valve provides research access for future experiments.

Ask a question or find out about visiting the CUBO site.